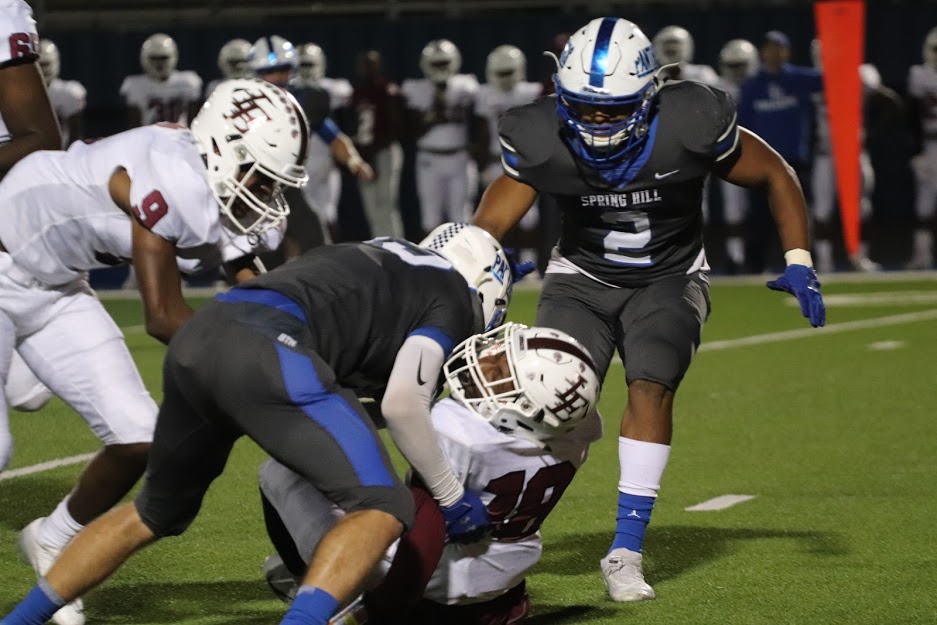 Gage White completed his first nine passes on Friday and finished with five touchdown tosses on the night, leading the Spring Hill Panthers to a 56-7 District 6-4A DII win over a short-handed Liberty-Eylau team at Panther Stadium.

Spring Hill moves to 4-4 overall and 1-1 in district play with the win heading into a bye week. Liberty-Eylau, which suited up just five varsity players and filled the rest of the roster with junior varsity and freshman players after mass suspensions from a brawl in a game two weeks ago, drops to 0-7 and 0-1.

The Panthers wasted little time taking control on Friday, building a 28-0 lead after one quarter and adding 14 in the second for a commanding 42-0 halftime lead.

White hit Jay Rockwell on a 56-yard scoring strike just nine seconds into the game to set the tone.

Four minutes later, DaVaunte Powers powered in from 4-yards out to extend the lead, and the Panthers closed out the scoring in the opening frame with TD tosses from White of 32 yards to Tyrese Jones and 23 yards to Zach Henry.

Henry then picked off a Ian Jones pass and returned it 56 yards for a touchdown midway through the second quarter, and the Panthers closed out the first-half scoring with a jump ball TD pass from White to Rockwell in the final minute of the half.

White’s 25-yard TD pass to Henry in the third made it a 49-0 contest, and Malik Cooks got into the scoring column with a 1-yard run early in the fourth quarter to push the Panther lead to 56-0 after Ashton Thomas booted his seventh extra point of the evening.

Jones hit Korbyn White for a 37-yard touchdown strike with 49.8 seconds remaining to help Liberty-Eylau avoid the shutout and make the final 56-7.