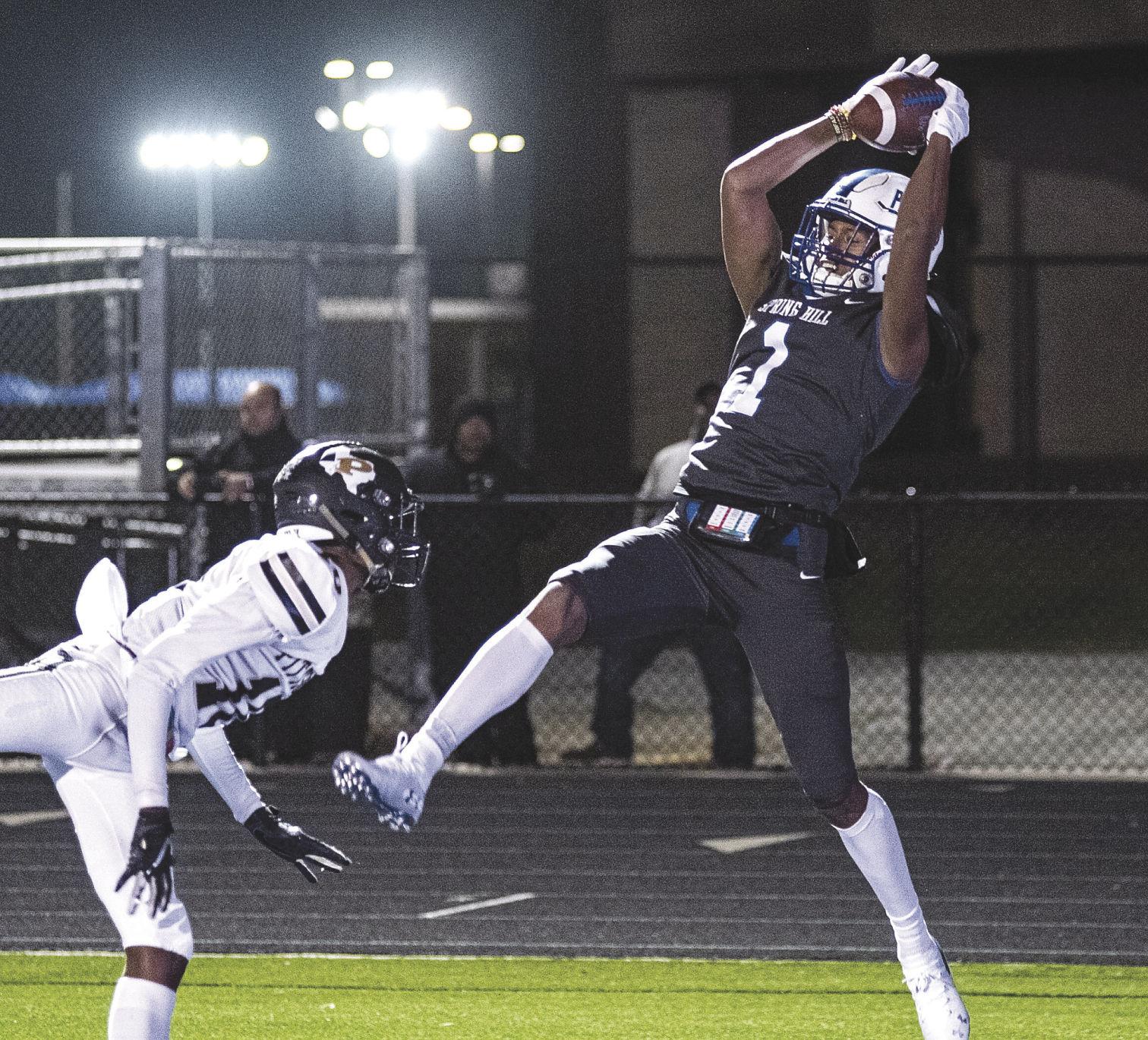 With playoff tickets already in pocket, the Spring Hill Panthers and Pittsburg Pirates played Friday night to determine postseason seeding. The winner would take third and the loser fourth in District 6-4A Division II.

Thanks to 263 yards passing and a pair of touchdowns from senior signal-caller Gage White, the Panthers strolled to a 28-14 victory and head to the postseason party for the first time in 12 years.

White, who holds every passing record in Spring Hill school history, eclipsed 7,000 yards for his career and threw his 72nd and 73rd touchdowns. The four-year-starter connected on 13 of 29 passes with touchdown tosses of 14 and six yards to sophomore wideout Jay Rockwell.

Spring Hill’s defense turned Pittsburg away on downs five times, blocked a punt and forced four turnovers. The Panthers, under first-year coach Jonny Louvier, finish the regular season 5-5 and will play Caddo Mills in the bi-district next week at a site and time to be determined.

Pittsburg, which closes the regular season 4-6 overall, draws Sunnyvale as its first-round opponent. Site and time for Pittsburg’s game is also in the preliminary stages and will be announced later.

The game proved sloppy at times with penalties and turnovers piled up on both sides. Spring Hill suffered two fumbles and White was picked a couple times. The two teams also combined for 120 yards in penalties.

It was a botched Pittsburg punt on the opening possession which set the Panthers up in prime real estate for their first opportunity with the ball. White pegged senior Zach Henry on an 8-yard slant that took the ball to the Pirate 2. Freshman halfback Davaunte Powers did the rest for a quick lead and sophomore Ashton Thomas’ point after made it 7-0 with not even three minutes gone in the game.

A backward pass from Kemarian McCain on the next Pirate possession was ruled a fumble and senior Logan Hutchins was there for a Panther recovery at 6:31 of the first quarter.

After a trade of possessions, White found junior Tyrese Jones on a 53-yard pitch-and-catch. Jones, while in transit, lost the ball and KJ Williams was more than happy to pounce on it for the Pirates.

Spring Hill’s next score came as the first quarter was drawing to a close. Senior Casey Mudoh, who racked up a couple quarterback sacks on the night, stormed through to block a Pittsburg punt and set the Panthers up at the Pirate 20.

White and Rockwell teamed up on a beautiful 14-yard back-shoulder scoring toss to complete a brief 2-play, 20-yard drive that used just 45 seconds of the game clock. Spring Hill snapped the ball just nine times compared to 23 by Pittsburg in the opening frame and still led 14-0.

The Pirates moved methodically for their lone tally of the first half and converted a couple third downs along the way. McCain, who totaled 205 yards on nine of 22 passing, moved the chains with a 9-yard toss to Giovanny Rojas on third and three. Sophomore halfback Braydon Bolton pushed his way through the middle on third and two as Pittsburg cut the deficit in half with 8:16 to play before the break.

A well-read screen pass by White was hijacked by Pirate defensive tackle Trace Reynolds, who lumbered 25 yards with the theft to the Panther 28. Two plays later, McCain was picked by Spring Hill senior Jonathan Clopton.

Clopton’s pick set the stage for Spring Hill’s next score. A 36-yard White to senior Eric Morrow was nullified by offensive pass interference. Undeterred, White connected with Jones on a juggling crossing route that resulted in a 55-yard gain. Rockwell hauled in a nice back-corner lob from White on second and goal for the score. Rockwell had seven receptions for 83 yards on the night, while Jones pulled in three for 124.

After a scoreless third, the Panthers stretched their lead to 28-7 when senior Malik Cooks bulled his way in from a yard out at 3:29 of regulation. The drive was set in motion when junior Brody Barnhill was gifted an errant pass from McCain.

The Pirates had just a little gas still in tank when McCain found a wide open Richard Rogers for a 65-yard TD on the very next play following kickoff. The point after from Rojas brought scoring to a close.