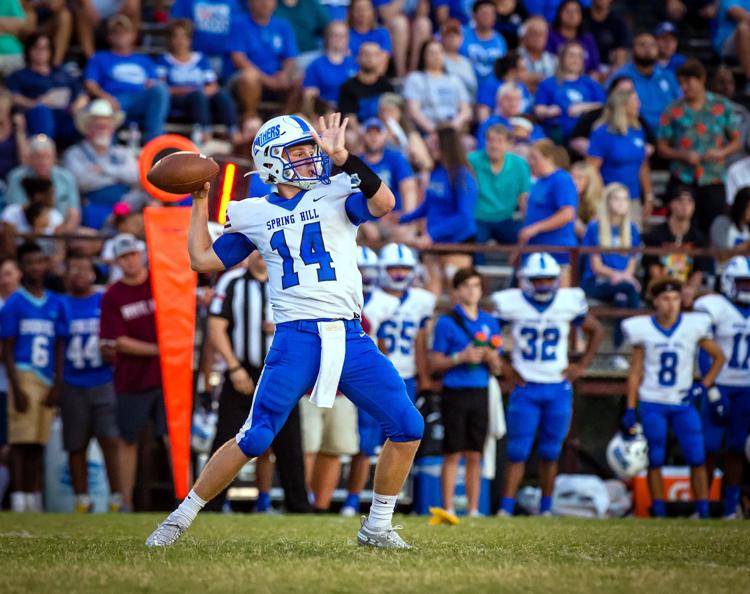 WHITE OAK — It’s been a rough road the first couple of weeks for the Spring Hill Panthers and White Oak Roughnecks.

That road got a little bit smoother for the Panthers Friday night as senior signal-caller Gage White completed 9 of 17 passes for 301 yards and two touchdowns in a 27-0 shutout of the Roughnecks in their annual cross-town rivalry.

In addition to White’s stellar passing performance, sophomore wide out Jay Rockwell pulled down five passes for 176 yards and 19-yard first quarter score to get the party started for the Panthers.

Spring Hill, which carried a 14-0 lead to the break, got its second score when Devontae Powers powered his way across the line from three yards out as the first quarter drew to a close. The Panthers, who missed on their initial point after, got a 2-point conversion from Powers.

The second score was set up when Panther junior DB Curtis Crowe perfectly read a Blake Barlow pass and stepped in front of the intended Roughneck receiver at midfield and raced 47 yards to the three yard line before being tackled.

Barlow’s ill-advised pass came after he moved the chains on a well-executed quarterback keep the play before. White Oak’s offense found the going tough much of the first half. The Roughneck defense, however, rose to the challenge on several occasions.

The Panthers got turned away on downs when Colton Cobb and Carson Roling stoned White on a fourth-and-short after a 17-play 66-yard march that consumed near nine minutes of the first period.

Spring Hill moved all the way to White Oak’s four early in the second quarter when White and Rockwell teamed up on a 49-yard rainbow. Jose De LaCruz was called on for a 21-yard field goal that was blocked by Jackson Frazier with 6:59 to play in the half.

The Roughnecks’ best chance at scoring in the half came when their defense thwarted another Panther drive on downs and Barlow found Micah Gibson for a 23-yard pass play to the seven. Barlow would fumble as the halftime approached and the scoring opportunity went by the boards.

It didn’t take the Panthers long to strike after the break. White and Rockwell once again made good on a 51-yard pass play on third-and-long. Spring Hill converted five of 12 third down opportunities. Junior Michael Marrs, who led the Panthers with 66 yards on 20 carries, found the pay window from three yards out at 8:12. The point after stretched the Spring Hill lead to three scores.

The exclamation mark came when White hit senior Zach Henry perfectly in stride on a 47-yard TD pass at 5:17 of the third. Spring Hill might have added another score late in the third had it not been for a Dylan Creager pick of a White attempted screen pass.

Spring Hill (1-2) wins for the third straight year in the “Battle of Hawkins Creek” and moves to within 25-26 in the overall head-to-head series. The 27-0 shutout is the third such whitewash for the Panthers in the long-running the series which dates back 70 years.

The Panthers are home Friday to Rusk, while the Roughnecks (0-3) make a trip to Rains.