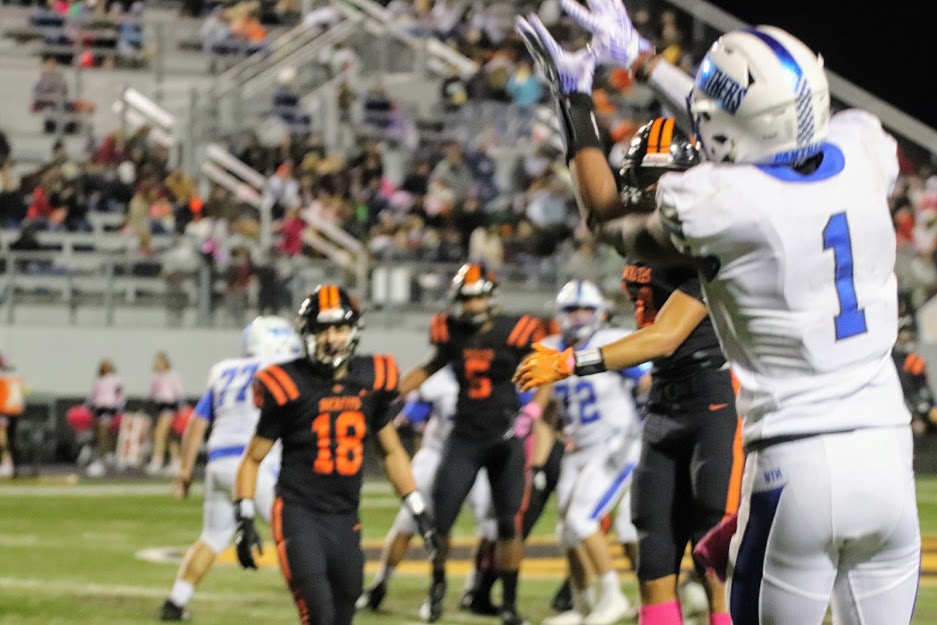 GILMER — Spring Hill made it interesting, but the Gilmer Buckeyes’ defense and strong running attack was too much for the Panthers to keep up with as Gilmer defeated Spring Hill 42-34 in the District 6-4A D II contest at Jeff Traylor Stadium.

The Buckeyes had chewed up the turf, with 386 total rushing yards, with Darrell Bush leading the charge with 24 carries, 170 yards rushing, and three touchdowns.

Spring Hill did manage to have success through the air. Senior quarterback Gage White was 25 of 38 for 364 yards passing, three interceptions, and three touchdowns. His favorite target on the evening was Jay Rockwell who had nine catches, 142 yards receiving, and two touchdowns.

Spring Hill’s opening drive started out in the worst way possible for them. The Panthers on their first play from scrimmage, Gage White threw a 42 yard pick six grabbed by Gilmer’s Marshae Spraglin. A successful PAT from Jose Hernandez put the Buckeye’s up 7-0 just like that.

Gilmer added to its lead going up 14-0 at the 5:26 mark in the first quarter, with a 16 yard rushing touchdown from Brandon Tennison.

Spring Hill bounced back late in the quarter and put their first points of the game up when Davaunte Powers punched it in form the one yard line, closing the gap, 14-7.

Gilmer, with just a few ticks left in the opening frame, The Buckeyes DJ Shead made a mad-dash to end zone for a haul of 46 yards to put Gilmer up 21-7 at the end of the first quarter.

In the middle of the second quarter with the Panthers driving in the Buckeyes territory, Gilmer picksed up its second interception on the night, when Jaydon Griffin picked off White on the 12 yard line and returned it to the Buckeye 25.

With just a few seconds left on the clock before the end of the first half and the Panthers desperately needing to score to keep things close, found the end zone with a 25 yard strike from White to Jay Rockwell to keep the Panthers within two scores down, 28-14.

The Panthers were not letting up just yet. With 5:22 left in the third quarter and Spring Hill capped an impressive 85-yard drive and find the end zone again when White found Rockwell for a 27-yard touchdown, The Panthers missed the PAT, bringing the score with Gilmer still on top 28-20.

Opening up the fourth, Bush found the end zone again for his third TD on the evening and keeping the Buckeyes in front with a 7 yard rushing score, capping a 10 play 74 yard drive.

Still, Spring Hill wasn’t not going away that easy. With just 3:32 left in the game, White found Zach Henry for an 86 yard catch and score, but for the Panthers, that’s as close as they could get. Gilmer took care of the ball in the final minutes and closed out for victory and their first district win of the on the year.