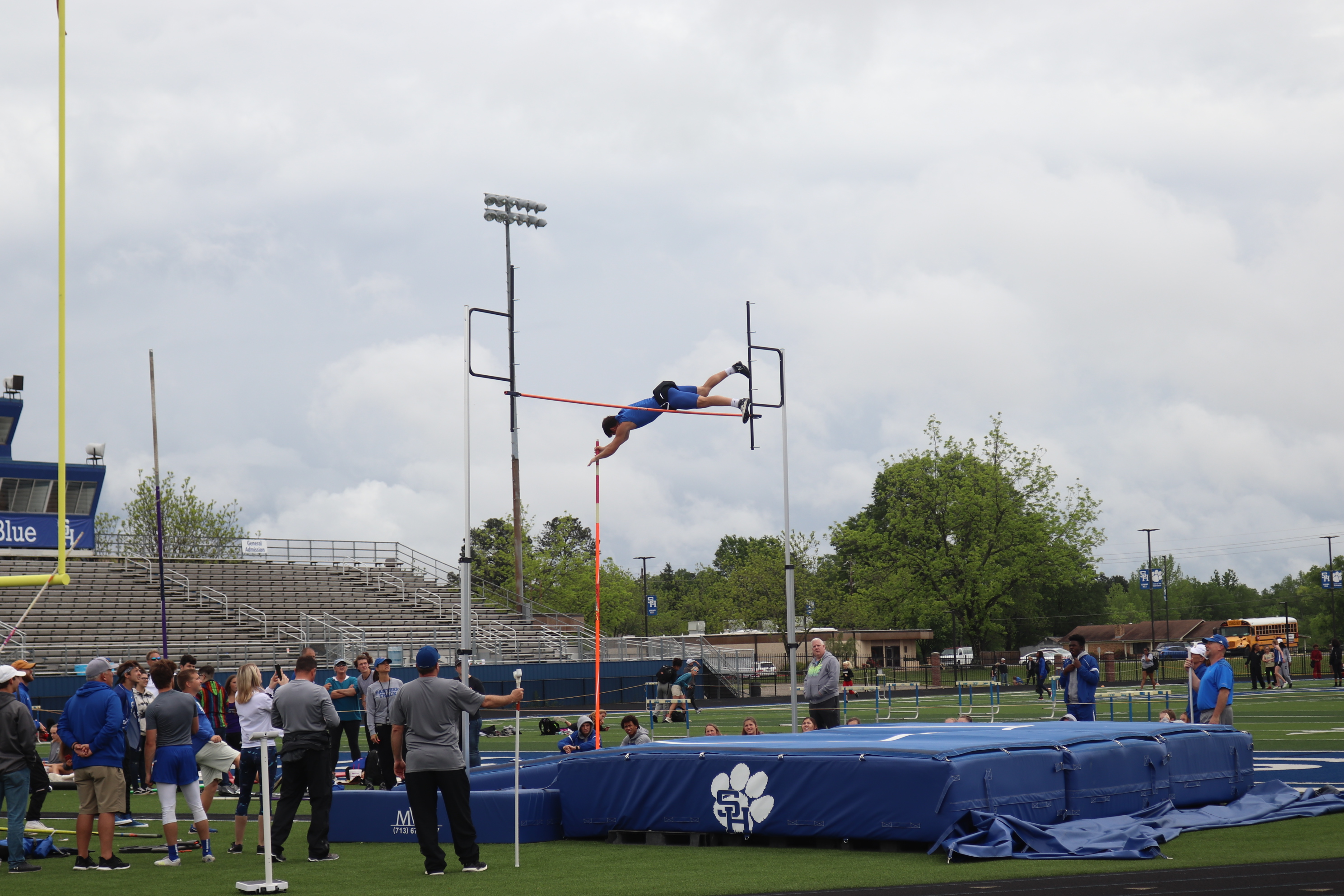 On a day that started out dark, gloomy, and full of water, turned into a great day for Spring Hill Track. After a delay in the morning, the meet got started up at 1:00pm and Zach Henry went soaring. Zach vaulted a personal best 13 feet 6 inches to take 2nd place and qualify for Regionals. While Zach was vaulting, Kaden Peppers was heaving the discus nearly 20 feet further than everyone else in the Area competition. Peppers took 1st place with a chunk of 145’5″, and qualified for Regionals for his second time in the last three years in the Discus event.
The gun fired for the 3200M run at 10:30am and Spring Hill represented their district well with 3 runners in the event. Those 3 runners took 1st – 3rd for the second meet in a row. Kalen Barlow ran 2 miles in 10 minutes, flat. His comrades, Marshall and Nick Bodenheimer, were only 15 seconds behind him to take the other two spots on the podium.
Kelsey Bell was Spring Hill’s Area qualifier in the long and triple jump. Kelsey qualified for Regionals on his 5th jump of the competition with a jump of 41’4.25″. This is Kelsey’s first time to qualify for the 4A Region 2 Meet.
During the second session of field events, a flurry of rain came crashing through in a hurry. The small storm delayed most of the meet for about an hour, then everyone got back out to their competition. Spring Hill boys had two runners in the 800, Austin Martin and Jay Rockwell. Austin placed 2nd and Jay placed 4 in a really tough race to qualify for Regionals. It was a big day for those two boys.
Sawyer Smith, senior, had the closest finish of the day. The 100M Dash was extremely fast coming into the race. Based on time, Sawyer was lane 2 and hoping for a miracle to qualify for Regionals. What a competitor. After reviewing the video, Sawyer edged the Paris athlete in lane 1 by .01 seconds to take fourth place. He ran a season and probably career best, 10.98!
Cameron Rhodes lined up for the 110 Hurdles with confidence. Cameron told Coach Colvin, he was going to get 3rd in the 110’s, and that’s exactly what he did. Cameron started the year on JV and is now going to be representing Spring Hill at the Regional Track Meet in the 110 Hurdles.
Zach Henry and Vencent Rockwell were the Area competitors in the 400M run for Spring Hill. Zach didn’t run his best time, but he battled in the final 200 meters of the race to go from 6th to 2nd. Vencent Rockwell came in the 6th in the event, picking up a point for the team.
Anthony Hawkins and Cameron Rhodes competed in a tough 300M hurdle race. Hawkins finished with his best time of the season, closely behind the 4th place runner. Cameron didn’t run his best time due to a strain in his lower back, but he should be fine to run next week.
The 1600M run was a fun one to watch. Eight strong runners battled for those top four spots to continue their season. Kalen Barlow lead the whole race. It was obvious from the beginning, Kalen was the strongest runner. Barlow ran the mile in a personal best time of 4:28! Nick Bodenheimer finished really strong to pull into 3rd place in the last 50 meters of the race. Caleb Hutcheson finished 5th to give the Panthers team 2 points.
Spring Hill’s 1600M Relay team (Henry, J. Rockwell, V. Rockwell, Martin) finished 3rd place with a solid time of 3:28.

Kalen Barlow and Zach Henry were 4th and 5th best athletes in the meet with 12 schools there, based on points scored. Nick Bodenheimer was the 11th best.

Congratulate these kids when you see them and wish them luck in their attempt to qualify for the State Track meet.

Full results can be found at this address: http://www.trackmateonline.com/cgi-bin/tmr.cgi?div=Varsity+Boys&form=point_totals&id=mid%3a4194